Thrash metal fans, get ready for the highlight of your year!! ANTHRAX are coming to the The Wiltern on Saturday 22nd April 2017!! Tickets will sell out FAST for this incredible event, so don’t delay in getting yours – hit the “Buy Tickets,” button above now to be sure of your place!! 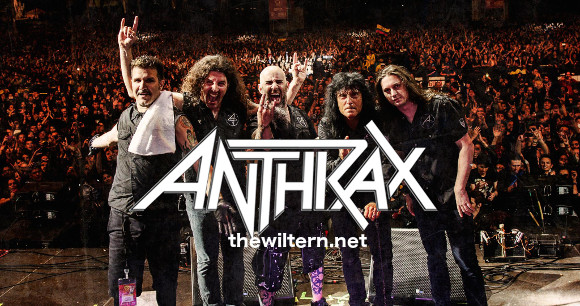 Formed in 1981 by guitarist Scott Ian and bassist Dan Liker, Anthrax are considered one of the pioneering acts on the thrash metal scene, part of the “Big Four,” alongside Metallica, Slayer, and Megadeth. Gaining attention for their ferocious live performances, Anthrax signed with indie label Megaforce Records, and released their debut album, “Fistful of Metal,” in 1983 to critical acclaim, praised by Martin Popoff as responsible for “putting New York back on the US metal map, and quality back in the books of bruising and uncompromising underground metal.” The album was referred to as “Metal Thrashing Mad,” giving rise to the term “thrash metal.”

In March, Charlie Benatne, Anthrax’s drummer, hinted that this summer, Anthrax will be working on their 12th studio album, stating that a few unreleased tracks from the “All For Kings,” sessions could serve as material on the upcoming new release, saying; “I think there are two or three that we could dust off and use as a starting point.” Fans will be foaming at the mouth to hear Anthrax’s new music live, as they undoubtedly will debut many of those songs during their summer 2017 tour!!

What are you waiting for??? Book your tickets to see ANTHRAX live today!!