Babymetal comes to The Wiltern on Friday 15th July 2016

He likes dark heavy metal. She like cutesy anime-like J-pop; or vice versa. You and your significant other need argue no more. Babymetal gives you the best of both worlds. Patrick St. Michel from MTV 81 describes their style as a mixture of "…seemingly disparate sounds of heavy metal and idol pop, creating music anchored both by throat-mauling screeches and cuddly choruses." With a band that fuses the cute and the edgy, expect a fusion of audiences as well. They're big in Japan, but their fanbase over this side of town are enormously excited to see them live, in the flesh. Decide now before tickets fly off the window. Go, book your tickets now! 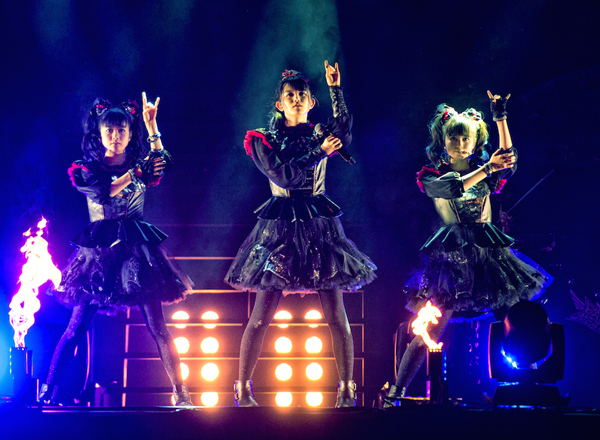 Babymetal was formed in 2010 as a side project of the female idol group Sakura Gakuin. This three piece, all-girl band consists of Suzuka "Su-Metal" Nakamoto, Moa "Moametal" Kikuchi, and Yui "Yuimetal" Mizuno. Their first single "Doki Doki Morning", which had an accompanying music video, intended for a DVD single release on a limited run only. However, when it was uploaded to YouTube, it garnered over 1 million views by the end of 2012. By February 2014, they were signed to a major label and released their eponymous debut album. Babymetal's hit singles include "Babymetal x Kiba of Akiba" (2012), "Head Bangya!!" (2012), "Ijime, Dame, Zettai" (2013), "Megitsune" (2013), "Road of Resistance" (2015), "Gimme Chocolate!!" (2015), and "Karate" (2016). Their hit albums are Babymetal (2014) and Live at Budokan: Red Night (2015). Now, they're a global phenomenon and have recently embarked on a world tour. The band is elated of the electrifying reception they have received from fans of varying musical tastes that have come together to appreciate their music. “I continue to believe that the songs of Babymetal continue to push them forward to discover new possibilities.", says Kobametal. She further expounds: "Since the release of Babymetal’s debut album in 2014, we have been racing across the globe non-stop on our world tour. Through the last tour I have come across people from all over the world and have had the chance to feel that miraculous moment when everyone came together via Babymetal.”