Not all Korean acts or the so-called 'K-Pop' movement throw a concert with a hyper-spectacle production of lights, costumes, props, glowsticks, cuteness overload, the works…Korean hip hop artists Dok2 & The Quiett choose to keep it low-key and sans the cute packaging and imaging. The just stay true to their genuine artistry and notoriety which found its way to distant shores. Even without the ballyhoo, the mix of superfans are palpitating with excitement, eagerly anticipating a visit from their hip hop heroes from another side of the globe. Better get your tickets as soon as possible, as this shaping up to be a runaway sold out show! 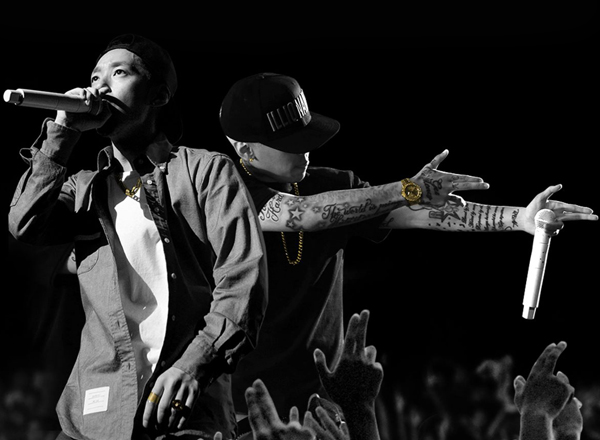 Dok2 (pronounced doh-KEE) and the Quiett are founders and CEOs of their own hip-hop label Illionaire Records.

Dok2 started his career and was signted to a major label at the tender age of 13. He is a songwriter and producer, and has written and produced materials for more established Korean hip hop groups. He released his first solo album in 2009.

Quiett is an artist but entreprenuership is one field that drives his career. In 2004, he co-founded indie Korean hip hop record label and talent agency, Soul Company. He released his solo album Q Train, in 2006. But it was in 2010 that he established and solidified his artistry , with his album The Real Me, went gold.

As these two heads met–Dok2 & The Quiett established Illionaire Records on January 1, 2011; and is now reputed as one of the most influential underground labels in Korea.