Dreamy pop rockers, Glass Animals are coming to The Wiltern on Thursday 24th September 2015! Glass Animals bring to mind the likes of The XX and Alt-J, with their psychedelic and atmospheric sound. Their debut 2014 album, Zaba, uses tropical percussion and Jungle Timbres, this band is a real asset to the Indie scene. Seeing them live is more like an experience than a performance – so come and emerge yourself in their beautiful waves of music and dance to their trippy light displays! 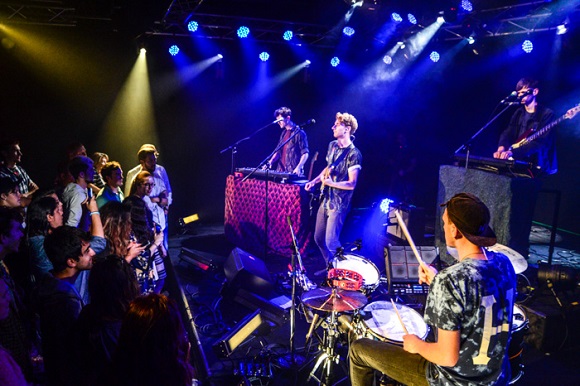 At just 14 years old, Dave Bayley met his friends; Drew Macfarlane, Edmund Irwin-Singer, and Joe Seaward. Little did they know that when they would finish school, they would start a band together. While studying at University, Glass Animals produced their debut E.P. titled, 'Leaflings' in 2012 and a year later signed with label – Wolf Tone. Through the label, they released their second E.P. record, which included the hit singles such as "Black Mambo."
And in 2014, the band had created enough material to record their exciting debut, 'Zaba', the album has helped to put Glass Animals on the map and has crafted them a dedicated fan base all over the world!
Their unique music combines elements of Dubstep with good ol' Dance music, with hints of R&B and Traditional rock. They describe themselves as "Like the sound of unicorns whispering, but with no cowbell." The band draws influence from other artists such as; Flying Lotus, Burial, Radiohead, Animal Collective.

Their live performances have been reviewed as "Super Trippy", "The Best Secret in Indie Pop", "One Of The Best Shows I have Ever Seen", "Amazing Young Band – Will Explode Soon."
So what are you waiting for? Book your tickets now and catch them on their 2015 U.S Tour!