God Save the Queen - A Tribute To Queen Tickets

"The Show Must Go On", the 2014 world tour of God Save the Queen – A Tribute To Queen, comes to The Wiltern on Tuesday 5th August 2014, to put you in a musical spell, a kind of magic that only the music of Queen can give. This will definitely rock you to your heart's content! 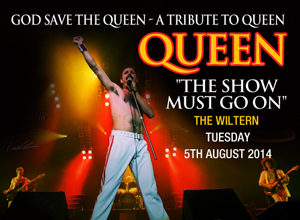 In 2011, Rolling Stone Magazine hailed them as 'the best tribute of all tributes'. God Save The Queen (a.k.a. Dios Salve Regina or DSR), has been spreading the kind of magic that breathes new life and reinvigorates the splendid energy and the vibrant spirit of the music of Queen. This 2-hour musical extravaganza not only stages the grandiose spectacle of lights, sounds, and special effects reminiscent of a Queen concert, but it amazingly captures the outstanding, close-to-perfect performances and renditions — from Freddie Mercury's powerhouse vocals to Brian May's shredding guitar licks. Pablo Padín, is not only dead-ringer for Freddie Mercury, but has meticulously captured the signature moves and nuances that only a die-hard Queen fan could identify. The band is a tight unit with impressive musicality in delivering Queen's immortal hits such as “Another One Bites the Dust,” “Bohemian Rhapsody,” “Crazy Little Thing Called Love,” “Fat Bottomed Girls,” “Flash to the Rescue,” “Killer Queen,” “We Are the Champions,” “We Will Rock You,” and “It's A Kind of Magic,”…to name a few.

This is the real life, this is not fantasy…God Save The Queen will bring back the most vivid moments in Queen's majestic reign in the realm of rock music. Get your tickets, in a flash!