If you follow the trail of a crowd of people singing their hearts out and having fun, you'll most likely end up in a venue where Guster is performing onstage. So don't miss your chance to revel in fun, music, and laughter as Guster comes to The Wiltern on Thursday 2nd April 2015. These indie alt-rockers from Boston always carry around a bag-full of antics, apart from their arsenal of hit songs. They're genuine and natural crowd pleasers and entertainers. No wonder, lines are getting longer and crowds are getting thicker for their shows as of late. With that said, your best option is to get tickets as soon as you can. 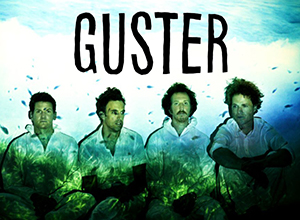 College buddies Adam Gardner, Ryan Miller, and Brian Rosenworcel from Boston, Massachusetts began playing together in 1991. Collectively (and initially) calling themselves Gus. After a series of campus, coffee house, and 'underground' gigs, their independently produced debut album entitled 'Parachutes' saw the light of day in 1994. At around that same time, another artist named Gus signed to a major label, thus, the band had no choice but to rename themselves Guster. After two years, Guster released another indie underground album entitled 'Goldfly'. In 1999, the gods of mainstream were smiling upon them as they released their third studio album Lost and Gone Forever, with the single "Fa Fa". The single made it onto the Adult Top 40. From there, there was no turning back. Their fourth album 'Keep It Together' gave Guster two singles in the Adult Top 40 ("Careful" and "Amsterdam")and its follow-up, Ganging Up on the Sun, peaked at 25 on Billboard 200.

Guster are marked as masters of showmanship who bring sheer glee and a big burst of humor and energy as they perform onstage. And who wouldn't want to be part of their 'tradition' of making fans throw ping pong balls onstage as they sing "Airport Song"? You've got to be there. Don't miss out on the fun! Get your tickets now!