For one night at The Wiltern alternative rock band Needtobreathe are performing songs from their latest hot album release Rivers in the wasteland. Due for release on April 15th it is the follow up their critically acclaimed album The Reckoning. The New York Times have said "this gifted band makes anthemic Southern rock" Catch Needtonbreathe for a night of classic rock music. 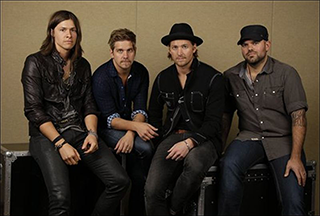 From a small town in the Carolina Needtobreathe was formed in 1999, playing through the southeast gathering a dedicated following. In 2006 they had a major breakthrough with the release of Daylight, the following year they released The Heat which went to #2 on the Heatseekers chart and spawned the hit single "More Time," a top 10 success at Triple-A radio (sitting alongside established artists like Coldplay and Jack Johnson).
The bands unique ability to blend ambient and arena-ready soundscapes with southern rock has not gone unnoticed by critics and are widely considered to be one of the best southern rock bands around.