Power pop rockers, Ok Go are coming to The Wiltern on Saturday 2nd May 2015 to promote their 2014 album, 'Hungry Ghosts. Known for their many viral online sensations, like the treadmill dance routine in 'Here It Goes Again' – making them such a unique asset on the mainstream today.
“We’re very curious people, so whether it’s film or music or technology or whatever else, it’s like someone has a crazy idea and usually, the rest of us are like, ‘Yeah, that’s awesome!’
Their energy is electric, do not miss this kicking event! 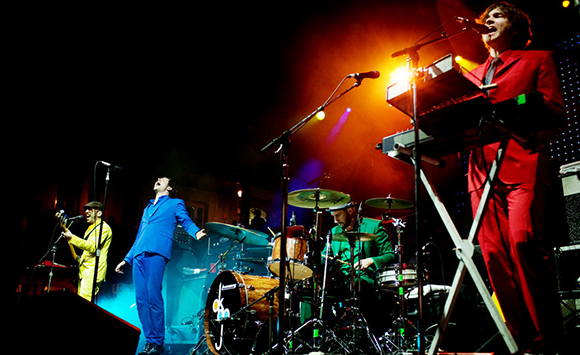 Hailing from Chicago, is the playful pop infused indie band, Ok Go! Their music has had enormous recognition and has rewarded them with a longstanding career of over 15 years. They are mostly known for their eccentric, creative and comical music video's, which often include the band members performing a dance routine and the use of unlikely props such as; treadmills, dogs, pianos, wind chimes, drones, and scooters – creating a highly captivating video to watch, it's no wonder that the news spread fast and provided them with best music video awards, time and time again.
Their latest album, 'Hungry Ghosts' was release in 2014 and has evolved into a electronic based record.