As Rise Against says in their latest single, "I Don't Want To Be Here Anymore"… their fans would definitely retort back with 'hell yeah, we would!" Get ready to make some noise and make way for hardcore punk outfit Rise Against, as their 2014 world tour takes them to this side of L.A. for a ferocious performance at The Wiltern on Tuesday 16th September 20, 2014. 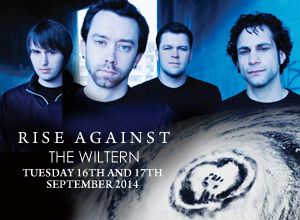 Rise Against's ongoing world tour serves to rocket launch their latest album "Black Market", with their current single "I Don't Want To Be Here Anymore". The band will be supported by Touche Amore and Radkey, for the North American leg.

Chicago-based members Tim McIlrath (vocals), Joe Principe (bass and vocals), Toni Tintari (drums), and Mr. Precision (guitar and vocals), banded together in the summer of 1999, under the name Transistor Revolt. In 2001, The band changed its name to "Rise Against"; and its current line-up consists of Tim McIlrath (lead vocals, rhythm guitar), Zach Blair (lead guitar, backing vocals), Joe Principe (bass guitar, backing vocals) and Brandon Barnes (drums, percussion). In that same year, they released indie albums, but mainstream success came from their major label debut album Siren "Song of the Counter Culture", released under Geffen Records. This and their succeeding albums were Billboard Top 200 chart toppers, and earned Gold and Platinum successes in the US and Canada, and at the same time, creating a massive fan base for the band in many parts of the world.
Rise Against are staunch supporters of advocacies like animal rights, vegetarianism, and straight edge –hardcore punk bands who refrain from the use of alcohol, tabacco, and recreational drugs.

Throw your fists in the air. Scream your lungs out. The music will possess you. All you need is a ticket. Rise Against will do the rest. Grab those tickets now!