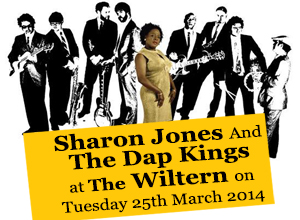 The essence of funk/soul music of the mid-60s to the mid-70s is very much alive and kicking. Thanks to Sharon Jones & The Dap-Kings, the so-called 'spearheads of this revivalist movement.'. Sharon Jones & The Dap-Kings purposely refuse to use today's hi-def digital recording technology; opting instead for the 'old school' analog recording equipment to acheive a sound that could not be found anywhere else. Hence, the band continues to headline major music
festivals, perform in sold-out huge theaters, and sell hundreds of thousands
of records year in and year out, inspite of the absence of any major label machinery nor massive mainstream radio play.

Sharon Jones & The Dap-Kings are also much-sought after on-stage and in-studio players for a gamut of recording artists considered as 'superstars'. Prince, John Legend, Beck, Ariana Grande, Sara Bareilles, Michael Buble, Amy Winehouse…and the list goes on and on…Sharon Jones & The Dap Kings'are definitely one of the most in-demand artists of our time. Their powerhouse energy and jaw-dropping performances not only draw crowds but also chart-topping albums sales. In 2010, the album "I Learned The Hard Way" debuted at #16 on Billboard's Top 200 album charts.

Hey soul sisters and funk soul brothers, wouldn't it be a shame for you to miss this?! Get your tickets now!