Parks and Recreation star Aziz Ansari has just announced a huge North American Tour. The tour dubbed 'The Modern Romance Tour' will touchdown at the The Wiltern on Tuesday 30th September. The general consensus is that he's a pretty funny guy, so funny in fact that he deserves his own tour, his previous tours sold out in a matter of hours so a good time to get your tickets is now, head to the ticket listing page for more information. 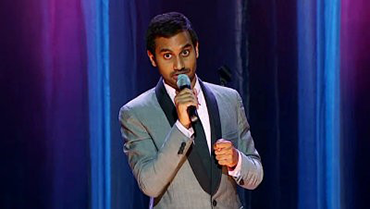 Aziz Ansari (born February 23, 1983) is an American actor and comedian. He stars as Tom Haverford on the NBC show Parks and Recreation.

Ansari began his career performing standup comedy in New York City during the summer of 2000 while attending New York University. In 2007, he created and starred in the critically acclaimed MTV sketch comedy show Human Giant, which ran for two seasons. This led to acting roles in feature films, including Funny People, I Love You, Man, Observe and Report, and 30 Minutes or Less.