Boyce Avenue comes to The Wiltern on Thursday 28th April 2016

They have given familiar and popular songs on the radio an acoustic twist; recorded it, and uploaded it on YouTube…and since then, it was love at first sight for legions of Boyce Avenue fans all over the world! Yet fans want more…As their fanbase grew in number, Boyce Avenue expanded their visibility as well. From computer screens, they're now filling-up concert halls, stadiums and arenas, performing their chillaxing acoustic renditions of hit songs and fan favorites.

Hop-in and join the Boyce Avenue tour bus! Just buy yourself and your crew tickets and you'll be in for a phenomenal musical adventure. Grab those tickets and buckle-up! 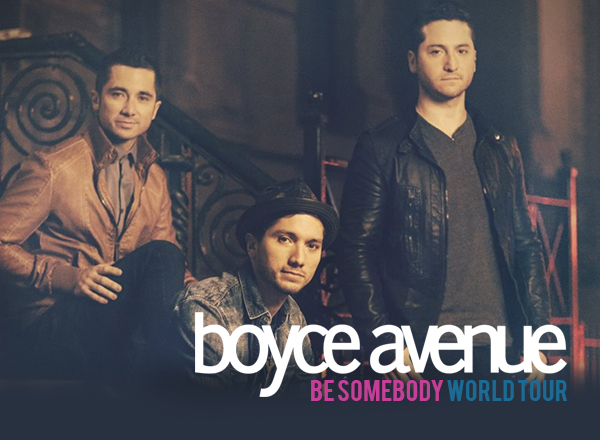 To date, Boyce Avenue's YouTube channel has 1.9 billion views and over 7 million subscribers — making it one of the most visited channels worldwide. Boyce Avenue harnessed the power of the internet and social media to propel them to fame, beyond the 'viral superstar' status. They are now legit music artists who have established their identities and captured a vast audience who buy their albums or download their songs, and catch them in their live shows.

Alejandro Manzano (lead vocals, rhythm acoustic guitar, piano), Fabian Manzano (lead electric & acoustic guitar, backing vocals, keyboards), and Daniel Manzano (percussion, bass, backing vocals, violin) are brothers who jammed together to seriously pursue a career in music. They were once signed to a record label, but later decided to form their own indie label 3 Peace Records. They chose to stick to their indie – guerilla marketing strategy which proved to be effective in making people from all over the world stop, look, listen, and love their easy-like-Sunday-morning renditions of popular hits. Since their headlining tour in 2009, the band has performed in sold out shows all across, America, Europe, Australia, and Southeast Asia.