Synth wielding ringleader of the Noughties' New Wave resurgence and larger-than-life front man of The Killers, Brandon Flowers, is touring once more this summer to promote the release of his second solo album The Desired Effect! On the subject of the new album, a collaboration with producer Ariel Rechtshaid, Flowers wrote in a handwritten note on his website:

“Ariel and I have been collaborating in the studio, working twogether [sic] in the spirit of conversation, contention, and at long last, sweet contrition. No one has yet seen or heard the change. But soon, we all will.”

Brandon Flowers comes to The Wiltern on Saturday 26th September 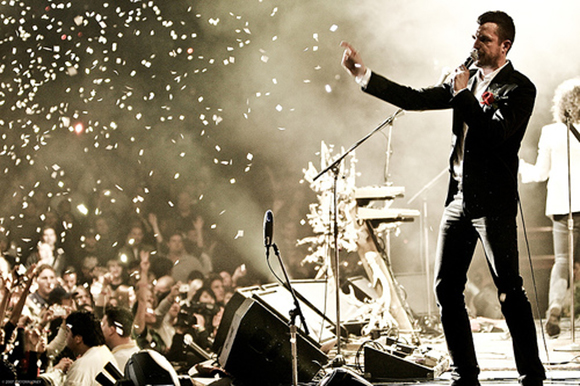 Brandon Flowers rose to prominence in 2003 as the principal songwriter and lead singer of the multi-platinum selling Las Vegas-based synth-rock band the Killers, who have been nominated for seven Grammy Awards, seven BRIT Awards, and twenty-four NME Awards so far in their incredibly successful career. A prolific songwriter and notably charismatic front man, Flowers launched his solo career in 2010 while the rest of The Killers enjoyed a brief hiatus. His chart-topping debut album Flamingo received both critical acclaim and commercial success. After returning to the stage with The Killers in 2011 and recording 2012's Battle Born, Flowers is set to release his hotly anticipated sophomore solo effort, The Desired Effect, in May 2015.