Charli XCX is back! The British alt-pop singer comes to The Wiltern on Tuesday 1st October 2019 on the Charli Live Tour, which celebrates the release of her first album since Sucker in 2014! Fans can look forward to a fresh new set full of hot new material from the incredible performer:

“This album is my most personal, which is why I decided to call it by my name,” she wrote on Instagram. “I’ve put as many of my emotions, my thoughts, my feelings and my experiences with relationships into these 15 songs and I am so proud of them. Those of you who have been with me on my journey as an artist, I know you have waited for a new album from me for a long time, and I really hope Charli is all you can imagine and more. I cry when I listen to it – and I also wanna party when I listen to it so I KNOW ITS GOOD.” 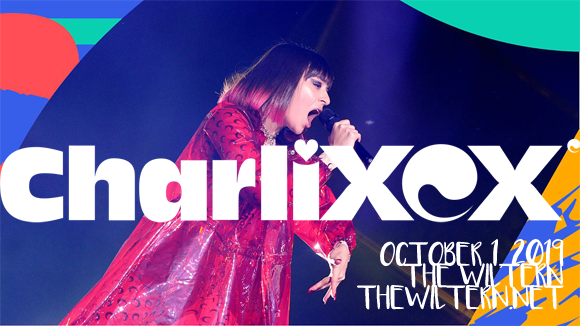 Signed to Asylum Records in 2010, English singer, songwriter, music video director, and record executive Charli XCX found global fame in 2013 when she featured on Swedish DJ duo Icona Pop's "I Love It", which was a top ten hit in multiple countries. She made her solo studio debut later that year with the album True Romance, following up in 2014 with Sucker. 2014 also saw her reach new heights when she featured on Iggy Azalea's global hit "Fancy". She released the Vroom Vroom EP in 2016 and the mixtapes Number 1 Angel and Pop 2 in 2017, and 2019 sees the release of her third studio album, Charli, preceded by the singles "1999" ft. Troye Sivan and "Blame It on Your Love" ft Lizzo.