Known for its commitment to providing outstanding entertainment from the world's top talent, The Wiltern is outdoing itself this time! Get ready for Crystal Castles, on their massive worldwide tour, coming to The Wiltern on Saturday 21st October 2017! Tickets are currently available for this exceptional show, but be quick – they won't last long! 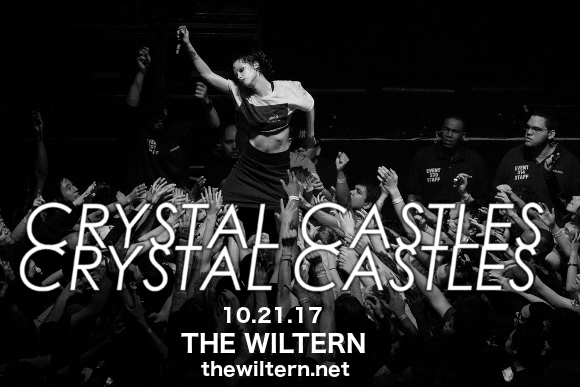 Formed by songwriter/producer Ethan Kath and songwriter/vocalist Alice Glass in Toronto in 2006, the first collaboration by what would become Crystal Castles was a track named; “Alive Practice,” which they released online. After the pair performed the song on an episode of Skins, the track received a lot of attention, and the pair decided to officially work together and release the song formally. The result was a four-track EP. Following this, the band released their first album, “Crystal Castles”, in 2008. The album was popular with audiences and critics alike, and ranked at number 39 on NME's "Top 100 Greatest Albums of the Decade" list.

The duo went on to release two more albums together, “(II)”, which charted on the Billboard 200, and included the single "Not In Love", featuring The Cure vocalist Robert Smith, and (III), ranking as the number 1 album of 2012 on Tumblr and Hype Machine.

Alice Glass left the band in 2014, after which new vocalist Edith Frances joined the band. The new duo took four years before releasing their latest album, “Amnesty (I),” in 2016, to critical acclaim. Get ready to see the incredible duo live – book your tickets to Crystal Castles today!!!