Taking a brave step to share his authentic self, the much-loved Savage Garden frontman Darren Hayes drops his fifth solo studio record, Homosexual. As an ode to living out one's true self, Hayes explores his journey to finding liberty in his identity. With a new record to celebrate and 25 years of Savage Garden, the man is hopping on the Do You Remember Tour with a stop at The Wiltern on Saturday, 15th of April 2023. Dedicated to celebrating the 25th anniversary of Savage Garden, his solo hits, and many more, you definitely can't miss out on Darren Hayes' big return to the live stage by booking your tickets now! 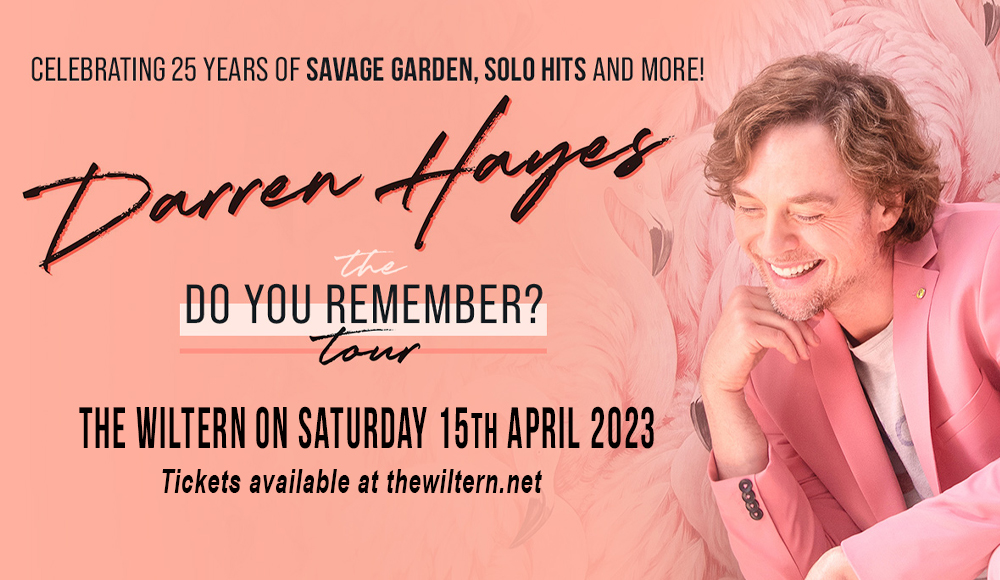 Darren Hayes was the frontman and singer of the Australian pop duo, Savage Garden, who rose to fame in the mid-90s to early 2000s for their #1 hits "I Want You", "Truly Madly Deeply", "The Animal Song", "To the Moon and Back", and "I Knew I Loved You". Disbanded in 2001, Hayes carried on as a solo artist, releasing his first album "Spin" in 2002, selling two million copies globally, featuring his hit single "Insatiable".

Four studio records out by 2011, Hayes broke off his decade-long hiatus, shaking the world when he dropped his fifth studio record "Homosexual" in October of 2022. The album is an ode to celebrating one's true self and exploring the journey of trauma, healing, and acceptance.

With a new record shaking things up and twenty-five years since Savage Garden, the man is ready to hit the big stage once again. "After almost a decade out of the spotlight and all this time in lockdown I found myself really missing the electric feeling that only a live audience can bring," Hayes shared. "To sing these songs again after all we've been through is going to feel like a family reunion. I'm beyond excited to return."

Kicking off 2023 with an extensive tour, Darren Hayes is bringing 25 years of Savage Garden, his solo hits, and big surprises to the live stage across cities in Australia, the United Kingdom, and the United States.

Don't miss out on this chance to catch Savage Garden's biggest anthems making its return to the live stage sang along with a live audience, and many more surprises in store at the Do You Remember Tour led by the one and only Darren Hayes by booking your tickets now!