Neo-soul duo Floetry are back to make your nights that little bit sexier! The R&B queens reunited last year after an eight year hiatus to bring their titillating mixture of powerful performance poetry and achingly soulful music back to their adoring fans, and now, due to popular demand, they're coming to The Wiltern on Friday 8th April! Veering between dangerous dynamism and silken sensuality, these talented women will captivate and leave you wanting more – don't miss this show! 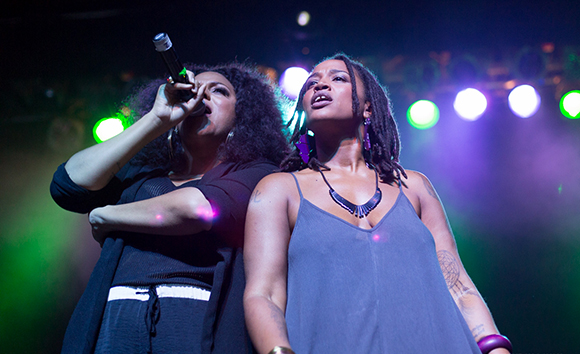 Marsha Ambrosius ("the Songstress") and Natalie Stewart ("the Floacist") are Floetry – an English neo-soul duo. The pair started writing and performing together in 1997, having met years previously due to their mutual love of basketball. After three years of playing shows in and around London, the pair decided to move to America to find their lucky break. After a brief stint in Atlanta, they moved to Philadelphia, where they befriended Julius Erving III, basketball great Julius Erving's son, in mid-2000. Erving went on to sign as their manager and introduce them to Jeff Townes, aka DJ Jazzy Jeff, who recorded them. In 2002, they signed with DreamWorks Records and released their debut album Floetic. Floacism, a two-disc live album that consisted of a CD and DVD, followed one year later. Their third, and final, album Flo'Ology was released in November 2005. It debuted at number seven on the US Billboard Hot 200 and number two on the Top R&B chart, and sold over 77,000 copies in its first week. Floetry parted ways in 2007, but reunited for a reunion tour in May 2015.