Get ready to light up your torches! Foster The People's iconic album "Torches" which includes the monster hit "Pumped Up Kicks", and amazing singles like: "Helena Beat", "Call It What You Want", "Don't Stop (Color on the Walls)", and "Houdini", had just reached a decade old. Foster the People is an indie pop band formed in Los Angeles, California, in 2009. With this important milestone, the band is due for a homecoming concert at The Wiltern on Thursday 18th November 2021. This will be the second of the three scheduled hometown shows. Foster The People fans remain hooked to that infectious electro synth-pop ditty that they're pumped up and raring to grab tickets to this show. This is one awesome party you shouldn't dare miss! Book your tickets now! 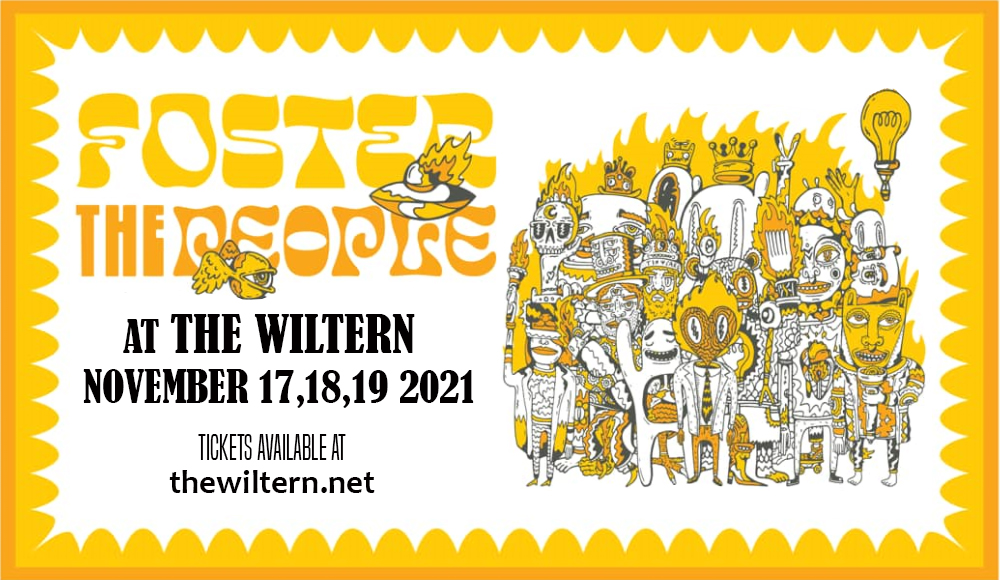 Foster the People was formed in 2009 in Los Angeles, California as then struggling musician and commercial jingle writer Mark Foster was seeking a collaborative undertaking. "I'd write one song and it'd be a hip-hop song. I'd write another and it'd be heavily electronic. Another would be like a spiritual, and another would be classic piano song. I was constantly trying to pull those elements together. It took me six years to do it." He still wished to be part of a group; reflecting on a residency he did at a venue performing electronic music, he said, "It was just me and a laptop. Really, it was terrible. I knew I needed a band."

Foster the People currently consists of lead vocalist Mark Foster, lead guitarist Sean Cimino, keyboardist Isom Innis, and drummer Mark Pontius. Soon afterwards as Foster came up with a song called "Pumped Up Kicks" and posted it on his website for free downloads, the song went "viral". As the band released their debut album "Torches" in May 201, "Pumped Up Kicks" broke through crossover and mainstream commercial radio and zoomed straight up to number three on the Billboard Hot 100.

As the band was riding high on its commercial success, critical acclaim followed suit. Foster The People had been listed for 35 award nominations, including three Grammy Award nominations for Torches and "Pumped Up Kicks". The band also scooped up five major wins which include the 2011 WEQX Award for Song of the Year, the 2011 SharkOne Award for New Artist of the Year, the 2012 Billboard music award for Top Rock Song and the 2013 MVPA Awards for Best Director of a Band and Best Computer Effects.

It's been ten years, and yet the infectious groove of "Pumped Up Kicks" is still ringing in our ears. A celebration is totally in order then! The band has come up with an amazing setlist which includes playing the "Torches" album in its entirety. Truly something to look forward to for FTP fans excitedly anticipating the bands' return on the live stage after three years. Don't be left behind. Book your tickets now!