Franz Ferdinand are Scotland very own indie rock stars, after huge success in the UK they are now bringing their music to the US, what is undoubtedly their biggest tour ever! They are storming into the The Wiltern on the 29th April, don't miss out, get your tickets now! 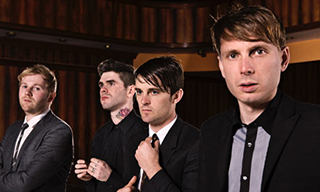 After the initial success of their first album they went on to win the 2004 Mercury Music Prize and two BRIT Awards in 2005 for Best British Group and Best British Rock Act. Don't miss this platinum selling artist live!