Baltimore trio Future Islands will bring their much aniticipated tour to the Wiltern on Thursday 20th November, no strangers to touring these guys perform up to 200 shows a year! These guys are synthpop masters with years of experience, the veteran performers will blow your socks off with new music material from their latest album. Get in the mood for some sickening synthpop, tickets available now! 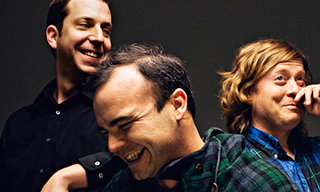 Critically acclaimed band Future Islands are a Baltimore based band, they met whilst attending East Carolina University in Greenville. The current members consist of Gerrit Welmers, William Cashion, Samuel Herring, Michael Lowry (Touring Drummer). In early 2014, the band announced they had signed to 4AD, who would release their new album, Singles, in March 2014. The band made their network television debut on March 3, 2014, on The Late Show with David Letterman, performing the lead single "Seasons (Waiting On You)