nu-folk trio Haim have just announced their North American Tour. For the second night in a row they will be performing at The Wiltern! They will be performing in support of the critically acclaimed album 'Days Are Gone'. Haims live shows provide a warm, upbeat and unique feel to the genre, the Los Angeles Times recently proclaiming “there’s probably not a cooler band in America right now” and FADER declaring that the band’s “practiced live show easily rivals any of their peers.” So what are you waiting for, head down to the iconic Wiltern on August 8th, tickets available now! 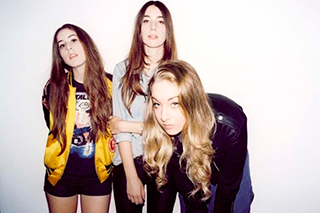 After playing at the South by Southwest Festival the group landed a record deal with Polydor. The latest album Days are Gone was recored with producers Ariel Rechtshaid and James Ford.
Touring in support of their latest album, which is critically acclaimed. Expect to hear hit songs:“Falling,” “Forever,” “Don’t Save Me,” and “The Wire,” as well as title track, “Days Are Gone,”. It's going to be a blast! See you there!