Pop pumping indie rockers, Kaiser Chiefs are coming to The Wiltern on Saturday 25th April 2015!
Specializing in a muscular and melodic blend of classic Brit-pop, post-punk, and new wave, the Kaiser Chiefs' blue-collar, pub-style take on indie rock managed to split the difference between timely and nostalgic. When Kaiser Chiefs' first 7", "Oh My God," reached number 66 on the U.K. charts – a startling achievement for an unsigned band – doors opened for the group to share the stage with larger acts and everyone was looking to sign them. "I Predict a Riot," on the other hand, reeled in U.S. modern rock radio programmers caught in a blooming new wave revival! Kaiser Chiefs live shows never let you down, here's your chance to rock out, loud and proud! 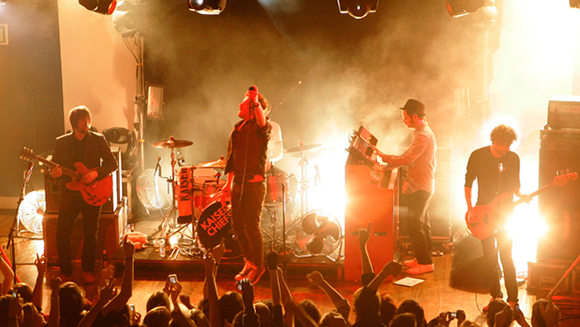 Things could so easily have stayed the same. After more than 10 years, four albums, platinum record sales, a volley of top ten singles and 3 Brit Awards, it would have been simple for Kaiser Chiefs to sit back and coast a while, to enjoy the warm glow of being one of Britain's most cherished bands.
But in late 2012 there came a change: the departure of founder member and drummer Nick Hodgson. Yet an event that might have derailed the band entirely instead it lit a fire that has carried the Kaiser Chiefs forward, through a period of re-evaluation and reinforcement, to create an album that is their most considered, literate, and impassioned record to date.
Education, Education, Education & War began out of frustration. The band's remaining members, lead singer and lyricist Ricky Wilson, bassist Simon Rix, guitarist Andrew White and keyboardist Nick Baines, decamped to Real World to see if they could kindle something new. In the days that followed, the sense of neutered creativity gave way to something thrilling and unleashed. By the end of that week, Rix recalls, they had "Nineteen or 20 ideas for songs." And more importantly, Wilson says, "We had the spark that gave us hope."
"At first the songs came from a very personal anger," explains Wilson. "But then I thought back to what I'd enjoyed writing about in the beginning, with Employment, and what I enjoyed then was looking around and writing about what I saw. And so over the next year I began to write songs about living in this country, about the thoughts that inspired in me."
The album title is a reference to Tony Blair's famed 2005 speech on the power of education: "Education, education, opened the door to future ongoing success.