In 2013, Lake Street Dive recorded a brand new album at the Great North Sound Society with critically acclaimed producer Sam Kassirer. The proceeded to tour around the US and Europe. And this year the band will embark on a second tour stint to promote the album around North America to. Also expect ot see them make appearances on the Colbert Report on Feb. 5 and Late Night with David Letterman. Don't miss the show, tickets up now! 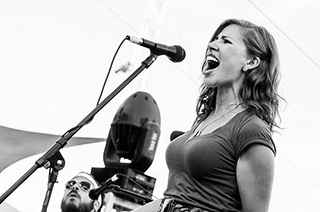 Lake Street Dive is an indie jazz and soul band that was founded in 2004 in Boston, Massachusetts. The band consists of Rachael Price (lead vocals), Mike "McDuck" Olson (trumpet, guitar), Bridget Kearney (upright bass), and Mike Calabrese (drums). They met while attending the New England Conservatory of Music in Boston. The band was named after a street with many dive bars in Olson's hometown of Minneapolis. The band tours extensively in both North America and Europe from their base in Brooklyn. They released a new albumin 2013 which they are supporting with a new set of North American Tour Dates!