America's newly discovered sweetheart is going on tour with her new album Life Support. Madison Beer shares similar path with world-famous Justin Bieber – discovered through her covers online she quickly became a loved artist, performer and internet personality. Years later after she split with her first label, she has finally released her first album. Rooted in authenticity, the rising pop singer’s debut is ambitious, intent on proving its own seriousness. Madison's powerful voice can be experienced live in The Weltern on Sunday, 28th of November! Tickets are still available. 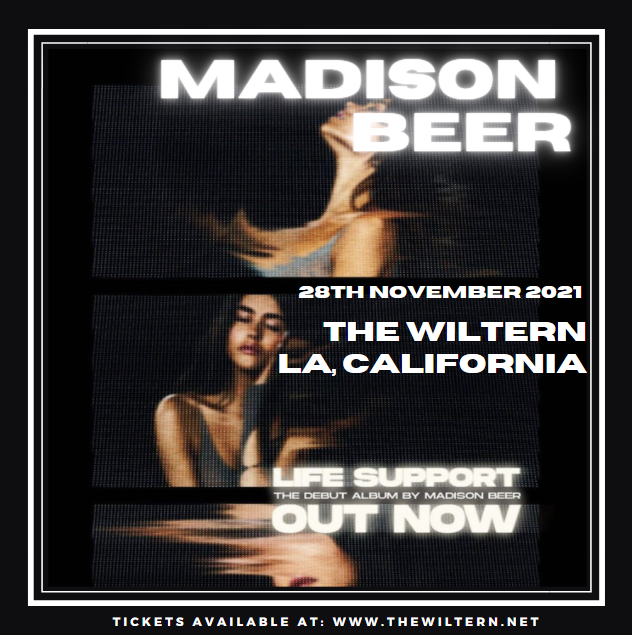 It's not every day that you get to see one of America's rising stars in a true Los Angeles art landmark. And that is exactly what The Wiltern is. And while many of Madison's fans may not have experienced her genius live, she recently gifted us with an incredible live which showed us what we can expect. Madison Beer opened with the high drama of “The Beginning.” She appeared as a shadowy silhouette in front of a muted orange spotlight. The performance floor soon lit up as well. The live band instrumentation soon took over and because of how well the entire show was put together, this was a rare circumstance where a livestream makes possible to forget we’re not living in normal times. Following the live debuts of “Good in Goodbye” and “Stay Numb And Carry On,” Beer nimbly jumped from track to track. On “Blue” she highlighted her sneaky good vocal chops. The anthemic finale continued with the bouncy “Baby.” If Madison Beer’s livestream show is any indication, fans will be lining up for tickets to see the real thing when the time comes.