The rising girl-power electropop act, MUNA, behind the 2020 viral dance anthem "Bodies" just announced their much-awaited third studio record. The upcoming self-titled album is coming out in June, and the girls just happened to give listeners a sneak peek with their newest single "Anything But Me". Despite an end of love in the new track, MUNA dances its way to rise above. With a growing fanbase after being signed into Phoebe Bridger's indie label Saddest Factory and the release of their 2021 indie-hit single "Silk Chiffon", MUNA is set to make bigger waves in the electropop scene. With recent viral hits and new music coming out soon, MUNA is set to put on a live show at The Wiltern on Wednesday, 26th of October 2022. It's time to raise those hands, shout, and dance as MUNA takes over. So, grab your tickets now! 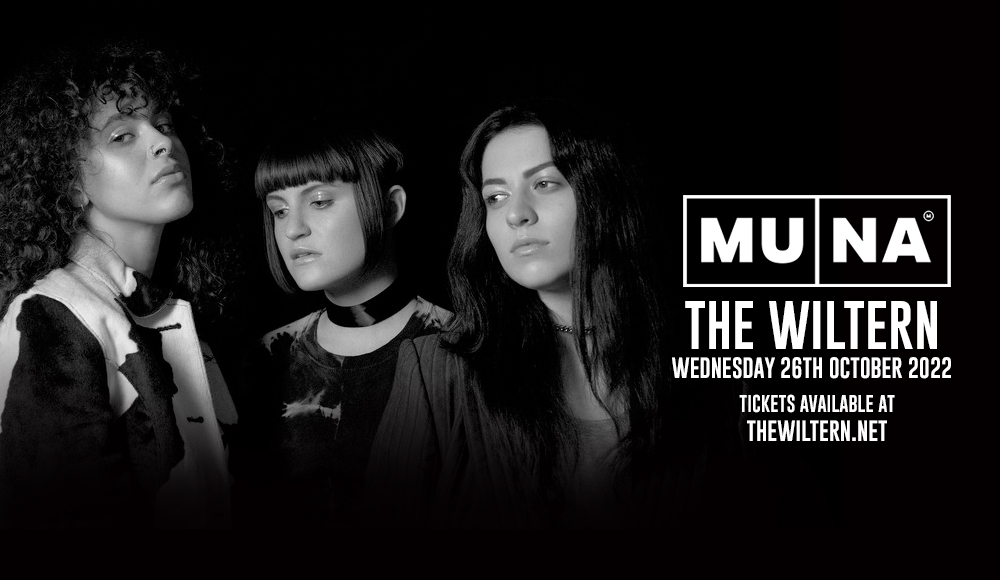 The power-trio Katie Gavin, Josette Maskin, and Naomi McPherson all met in college at the University of Southern California. Maskin and McPherson started collaborating in 2013, initially going in the direction of progressive rock but later on found their heart for pop when Kati Gavin joined in. After some experimentation, they soon found their edge in a hooky electro-pop sound.

2014 marked MUNA's breakout success in the indie scene with the release of their debut EP "More Perfect" on SoundCloud and Bandcamp. This led them to garner the attention of RCA in the US and Columbia in the UK. They dropped two albums under RCA. Their debut album "About U" was released in 2017, and their second record "Saves the World" came out in 2019.

Though after their second album, the group was dropped by RCA. Although, that didn't mark the end for the powerful girl trio. MUNA met 2020 with a viral hit, "Bodies" – a dance-inducing power track. As 2021 came, MUNA found a new family, signing with Saddest Factory – Phoebe Bridgers' indie label. They released "Silk Chiffon" feat. Phoebe Bridgers which marked their first alternative radio hit.

“What ultimately keeps us together, is knowing that someone’s going to hear each one of these songs and use it to make a change they need in their life," said Josette Maskin. Their upcoming album is a testament of MUNA's strength despite the uncertainty they met along the way. With a new family and a stronger bond, their upcoming record "MUNA" is one for the books.

The trio uses their platform as an avenue for the LGBTQ community to find a safe space. With all three members identifying as queer, they hope to use their influence to help the youth become more comfortable about themselves. In 2020, in the 50th anniversary of the 1st LGBTQ Pride parade, MUNA was named in one of the fifty heroes “leading the nation toward equality, acceptance, and dignity for all people” by Queerty.

Power. This is what MUNA is all about. Their capability of dance through life, self-empowerment, and rollercoasters along the way prove that MUNA is set to take on the current and make big waves as they prepare to drop their self-titled album and perform captivating shows for long-time fans and new listeners alike. So, don't miss out and book those tickets now!