The electric girl-power pop band, MUNA, just announced their upcoming self-titled studio record coming out this June. The girls took Spotify streams by storm with their 2020 viral dance hit "Bodies", and then signed to Phoebe Bridgers' indie label, Saddest Factory where they continued to amass a loyal following with 2021's catchy anthem "Silk Chiffon" featuring Bridgers. With a new label and a growing fanbase, MUNA is set to take on this new era stronger than ever. Greeting 2022 and teasing their upcoming album, MUNA just dropped their latest single "Anything But Me". Catch MUNA perform your favorite anthems and fresh new tracks live at The Wiltern on Tuesday, 25th of October 2022. Book your tickets now! 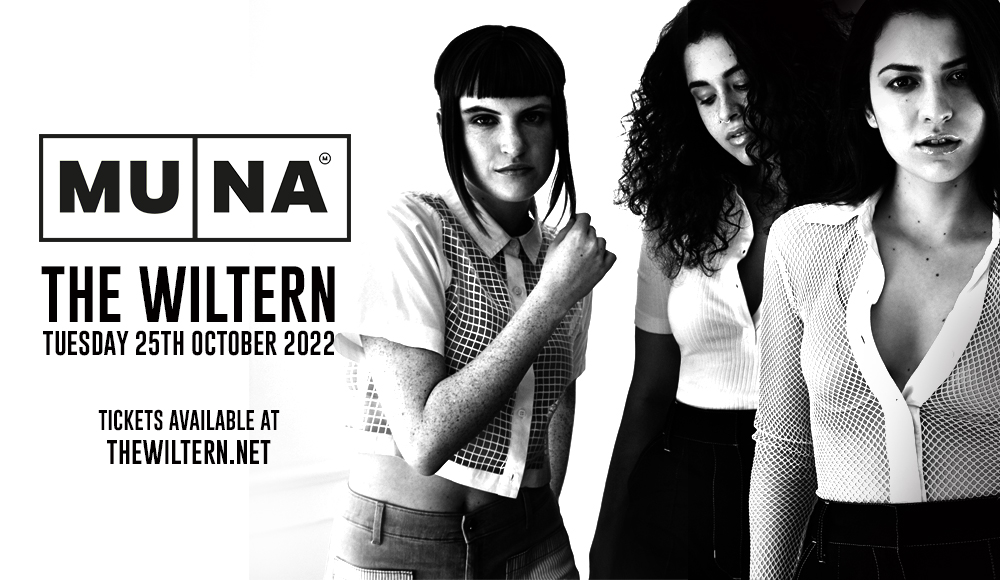 The powerful trio traces their roots to college, meeting at the University of Southern California. Josette Maskin and Naomi McPherson played guitars, while Katie Gavin added synth bass and vocals. After experimenting together, they found their signature hooky electric pop sound, then released their debut EP "More Perfect" on SoundCloud and Bandcamp in 2014. Their local success caught the eye of RCA in the US and Columbia in the UK.

They released their first major-label EP "Loudspeaker" in 2016, and their debut album "About U" in 2017 featuring its fan-favorite singles "Winterbreak" and "I Know a Place". In 2019, they dropped their second studio record "Saves the World", with its lead single "Number One Fan".

"Silk Chiffon" is a taste of MUNA's upcoming self-titled studio record coming out on June 24th. The new album is a group effort by the girls, signifying their strength after being dropped from RCA and finding a new family with Bridger's indie label.

“What ultimately keeps us together, is knowing that someone’s going to hear each one of these songs and use it to make a change they need in their life," says Maskin.

As a trio giving importance to their queer identities, they've found each other and their music as a safe haven for their listeners and fans. "I don't feel afraid to be myself. That makes me proud to be queer. That's the whole point of why we do this. We want a safe haven." said McPherson.

2022 marks a new era for MUNA. Together, they are set to conquer the world and shine brighter in the electric-pop scene. With a new label and newfound fans, brighter days are in store for the trio as they drop their third studio album on June 24th. Catch MUNA perform new bops and fan-favorite anthems live on their tour. Don't miss out, so book those tickets now!