Are you ready for the unmissable Christian rock band Needtobreathe?!? On tour and coming LIVE to The Wiltern on Thursday 2nd November 2017! It's going to be a phenomenal night so be sure to book your tickets in advance – quickly, before they run out! – and get on down for an evening you will never forget! 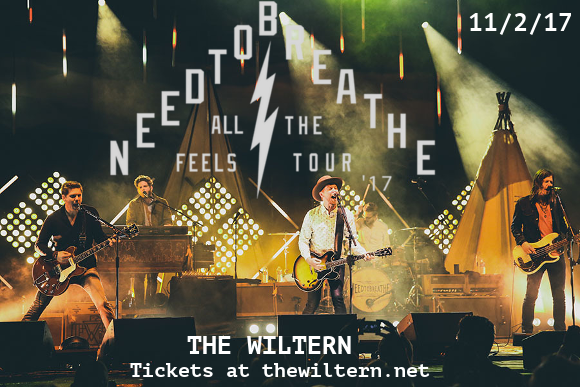 Beginning with the collaboration of the brothers William Stanley "Bear" Rinehart III and Nathaniel Bryant "Bo" Rinehart as they started to perform live in their hometown of Seneca, South Carolina, Needtobreathe came into existence with the addition of Seth Bolt, who recorded the band’s early material in his home studio. After signing with Atlantic, the band travelled to the UK to record their debut album, “Daylight” – incredibly, just before the release, they were featured on the front cover of CNN, an almost unheard-of feat for an unknown band!!

Their second record, “The Heat,” brought their music to a broader range of audiences and was received to a warm reception from critics. It was their third album, however, that really kicked things off for them – “The Outsider,” released in 2009, charted in the top 20 of the Billboard 200, establishing the band as one of the best new names on the Christian rock scene!!

Needtobreathe are now on tour with their 5th and most recent album, “Hard Love,” which shot to the top of the Top Albums chart and took the number 2 spot on the Billboard 200!!

Get ready to hear all the songs you love live – book your tickets to Needtobreathe NOW!!