Indie-pop favorite band, Peach Pit, hailing from Vancouver is coming 'right down the streets of LA to hit the stage at The Wiltern on Friday, 2nd of December 2022. The "Alrighty Aphrodite" and "Vickie" musicians are set to deliver a bigger and better set of shows up aboard their North American Fall Tour named "Right Down The Street". Get ready to cheer and sing along to their best indie bops and cheeky lyrics that take you on a journey of love once lost – and also found. Get ready to run right down the streets to The Wiltern when Peach Pit finally hits the stage by booking those tickets now! 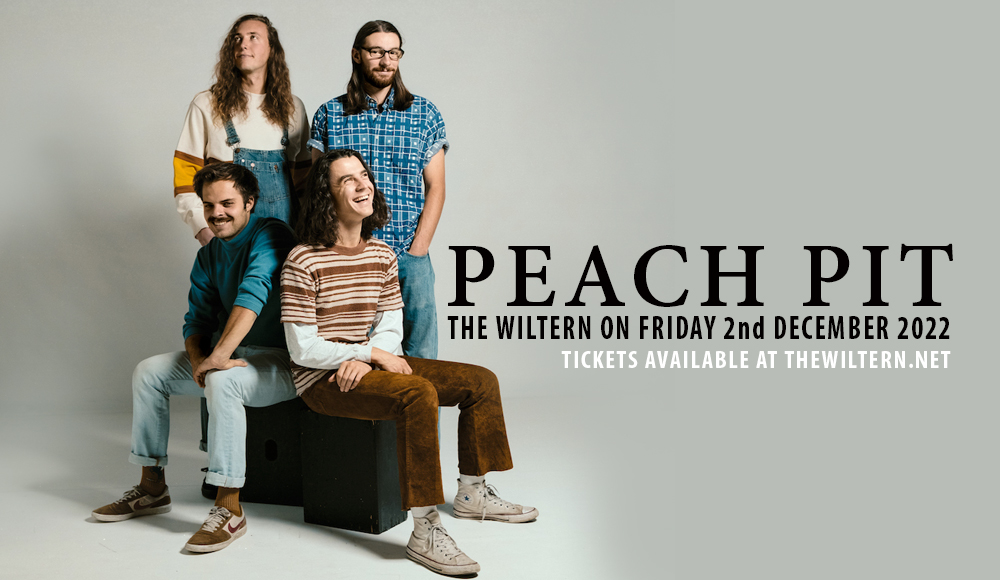 What started off as a musical project in high school between friends Neil Smith and Chris Vanderkooy, eventually became a crowd favorite in the indie scene for their bubblegum, dreamy, and at the same time edgy bops that talk about summer love and loss. Joined by Peter Wilton and Mikey Pascuzzi, together, they keep Peach Pit alive and kicking.

The band released their debut EP "Sweet FA", featuring their notable tracks "Seventeen" and "Drop the Guillotine" which established Peach Pit as a rising contender in the indie-pop landscape. Their debut album "Being So Normal" featured their hit single "Alrighty Aphrodite" which hit #37 on the Billboard Canada Rock chart, staying on the chart for 15 weeks. The album laid out Peach Pit's signature dreamy and ethereal tones with an edgy kick that fans couldn't get enough of.

In March of 2022, the band finally dropped their third studio record "From 2 to 3", featuring their singles "Up Granville", "Look Out!", and "Vickie". Mark Crickmay from Northern Transmissions in a review of the album said – "Smooth, sullen and effortlessly sombre — the boys in Peach Pit deliver another grade-A indie-pop album to the world,"

With a big new record off the shelves and a bigger tour right around the corner, Peach Pit is set to bring this new era to life on stage at their Right Down The Street North American Fall tour.

"We’re stoked to get back out there on the road again, it’s what we love best!" shared Neil Smith. "The shows and fans on our recent US tour were incredible, so we’re excited to revisit some of these markets in bigger rooms. The show will be bigger and better than ever before. Will there be lasers? Will Mikey crowd surf? You’ll only find out if you get a ticket."