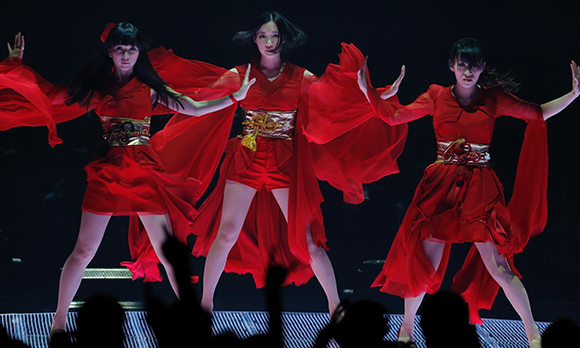 Perfume is a Japanese pop girl group from Hiroshima Prefecture, Japan, consisting of Ayano Ōmoto ("Nocchi"), Yuka Kashino ("Kashiyuka"), and Ayaka Nishiwaki ("A~chan"). The group was formed in 2000 at the young talent academy Actors School Hiroshima, and debuted with their first Hiroshima-local single "Omajinai Perori" released on March 21, 2002. They have been signed with Amuse, Inc. since 2003 and with Universal Music Japan since 2012. In 2005 they got a major contract deal with Tokuma Japan Communications, and released their major debut single "Linear Motor Girl" on September 21, but it was not until three years later, when the group's seventh single "Polyrhythm" was chosen to be the theme song of a recycling campaign by NHK, that they started to receive major attention in Japan. With roughly combined sales of both singles and albums, the group has sold over 3 million records, with 1.5 million albums sold in Japan alone as of March 2012