Skillet & Theory of a Deadman Tickets 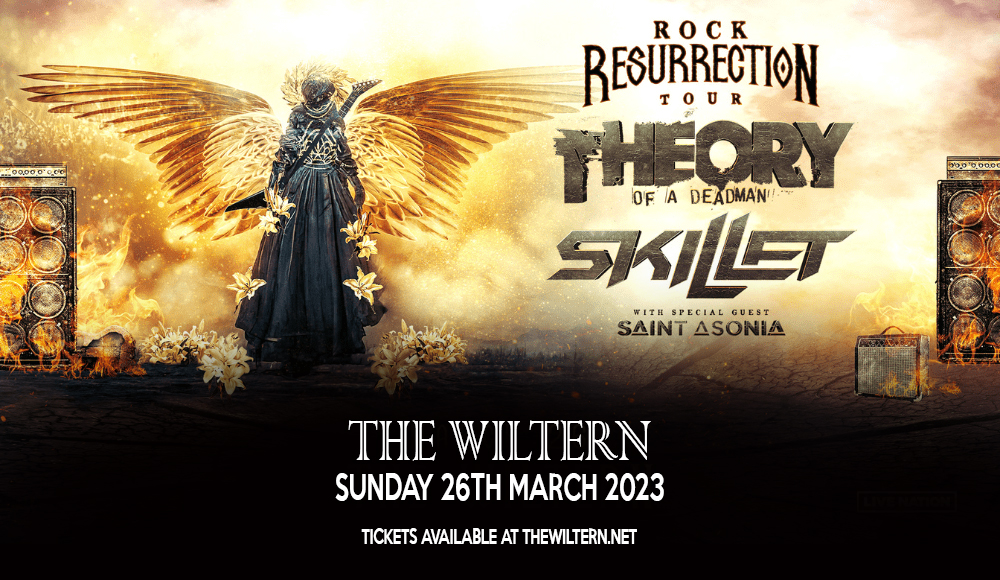 Canadian rockers Theory of a Deadman and American Christian rockers Skillet just announced a co-headlining 2023 tour with support from Saint Asonia. The bands are geared up to set stages on fire as they bring the "Rock Resurrection Tour" across North America.

"We’re super stoked to be touring with our good friends in Skillet and Saint Asonia this winter," shares Theory of a Deadman frontman Tyler Conolly. "We’re also really looking forward to playing new material for our fans!"

Having recently shared a new single "Dinosaur", marking their return to their raved hard rock vibe, big surprises are in for Theory of a Deadman fans as they tease new material on the co-headlining tour. With a highly-anticipated new studio album in the works, they might just make a big announcement any time soon.

"We are so excited to be touring with our friends from Theory again!" John Cooper, vocalist of Skillet, shares. "It’s been several years since our last tour together, and this time we are also joined by our friends in Saint Asonia. We are looking forward to kicking off 2023 the right way by joining forces for a super-charged rock show! Panheads get ready!"

As an American Christian rock band, Skillet defies darkness and rebellion through rockin' tracks that uplift the spirit. The Grammy-nominated act shook the airwaves for their surprisingly hard-hitting Christian rock singles including "Hero", "Whispers in the Dark", "Comatose", "Monster", "Feel Invincible", "Legendary", and many more.

Theory of a Deadman, hailing from British Columbia, formed in 1999, is known for their tones of rock blended with various tastes of other musical styles beyond their signature post-grunge and alt-rock foundation. They're known for their rock-driven tracks that hit #1 on Billboard Mainstream Rock charts including "Lowlife", "Bad Girlfriend", "Rx (Medicate)", and "History of Violence".

As rock comes to resurrect as the bands share the stage at their co-headlining 'Rock Resurrection Tour', Theory of a Deadman and Skillet are geared up to set the stage on fire with their electrifying hits and high doses of energy. With music that heals and sets the energy ablaze, make sure you book your tickets now!