That’s right, Switchfoot fans, your favorite band are returning in 2019 with their all-new album, “Native Tongue”!! What’s more, they’re bringing the incredible opening acts Colony House and Tyson Motsenbocker along with them for the ride… it’s all happening at The Wiltern on Friday 5th April 2019. Make sure you’re there – grab tickets while you can!! 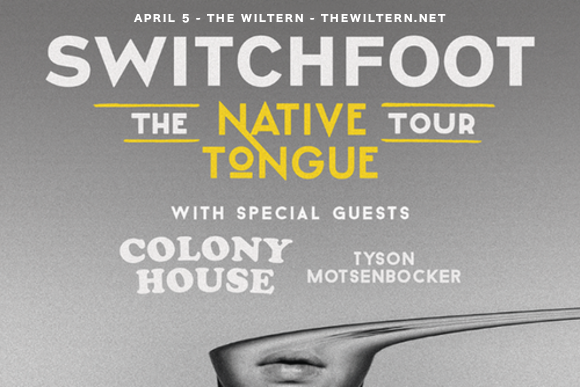 Are you excited for the new album?? Featuring guest appearances from Kaela Sinclair of M83 and Bear from NEEDTOBREATHE, “Native Tongue,” promises to be one of Switchfoot’s best albums yet, a statement the band themselves seem to have clarified in what they’ve said about the new record so far. “This album was born of joy not necessity,” the band said in their album announcement, a heartwarming thing for many fans to hear. “Songs chasing us rather than the other way round. We wanted to make a forward thinking album that pays homage to all the music of the past that we love: from Queen to The Beatles. If we had one more album left in our catalogue to make, we wanted this to be the one. We hope you enjoy it!”

You’ll enjoy it even more live, that’s for sure – do you have those tickets yet??