It's business as usual. The family business that has been rolling strong since 2017 is back on the road. The Allman Family Revival Tour powered by The Allman Betts Band is gearing up for yet another much-awaited jam session at The Wiltern on Tuesday 22nd February 2022 (Rescheduled from Sunday 19th December 2021). Joining this year's tour leg are consummate artists and musicians –Robert Randolph, Eric Gales, Jimmy Hall, Donavon Frankenreiter, Joanne Shaw Taylor, Cody, and Luther Dickinson, Lilly Hiatt, Lamar Williams Jr., and many more. The Allman Family Revival has become an annual live music event that pays homage to bona fide classic rock legacy artist, Gregg Allman, and the Allman Brothers Band. An incredible moment to revel for every classic rock music fan. Don't miss it; get your tickets now! 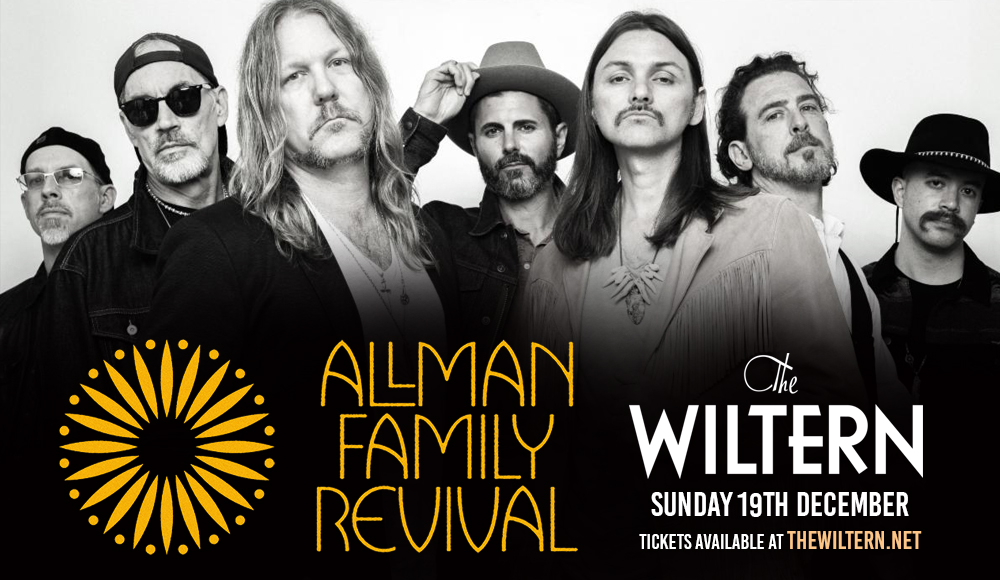 Running the family business has become a mission of sorts for Devon Allman (son of Gregg Allman), Duane Betts (son of Dickey Betts), and Berry Duane Oakley (son of Berry Oakley), who are at the helm of The Allman Betts Band. Along with Johnny Stachela (guitar, vocals), John Ginty (keyboards), R. Scott Bryan (percussion, vocals), and John Lum (drums), the band goes on a yearly quest to honor and celebrate the life, music, and memory of Gregg Allman.

Now rocking and rolling under the banner of the ‘Allman Family Revival’ Tour 2021, a host of other who's who in music have joined them over the years. This annual event, which was initially planned as Gregg Allman’s 70th birthday in 8th of December in 2017, attracted music legends like Robin Zander of Cheap Trick, wunderkind Marcus King, and the Orbisons, to join them onstage during the inaugural show. It has become an extended family gather of sorts as the jam band community of artists, musicians, and fans have grown in leaps and bounds. This year, the stellar line-up includes Robert Randolph, Eric Gales, Jimmy Hall, Donavon Frankenreiter, Joanne Shaw Taylor, Cody, and Luther Dickinson, Lilly Hiatt, Lamar Williams Jr., and many more.

“Hard to believe we are in the fifth year of The Allman Family Revival shows,” says Devon. “This year is going to be bonkers! 18 cities, coast to coast in historic theaters with our beautiful, talented friends jamming all night long. Can’t wait!”.

Now don't wait 'til the last minute. Make sure you're part of the family reunion. Book your tickets now!