Think soul, jazz, fun, rnb, pop with a dash of disco…Spend a soulful and sexy evening with these legends: The Dazz Band. JD Hall and The Ultimate Barry White Symphony Orchestra. The Emotions. & Larry Dunn. Believe it nor not, they're all coming together for an unforgettable show at The Wiltern on Saturday 11th April 2015. Give yourself some music pampering. Soothe the longing of your heart and soul…Get those tickets now before they're gone…. 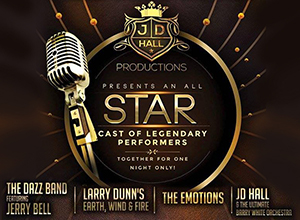 If you've been wishing to be serenaded by some of the most soulful voices planet earth has ever known, well, lady luck is on your side. This is one of the biggest parade of names, some of the most influential artists that helped shaped the true sound of funk, soul, jazz, and R&B.

Larry Dun is a musical legend. 'Rock & Roll Hall of Fame' is a citation that goes together with his name, for his stunning achievement with the superstar soul group Earth, Wind, and Fire.

The Emotions. Ever wondered why Mariah Carey's 'Emotions' and 'Dreamlover', Chery Lynn's 'Got To Be Real', and LL Cool J's "Pink Cookies In a Plastic Bag Getting Crushed by Buildings", seem to sound like you've heard them somewhere before? It's because they were all sampled from two of The Emotions' biggest hits "Best Of My Love" and "Blind Alley". The Emotions are an all-female-sisters group that were closely associated with Earth, Wind, And Fire. Maurice White, in particular, helped them a lot in their rich soul, rnb sound with a touch of pop and disco.

JD Hall and The Ultimate Barry White Symphony Orchestra. He is an actor and a voice artist. JD Hall is now actively touring his act of paying homage to Barry White and his music.