The indie garage rockers hailing from LA, The Read Pears, are hitting the stage at The Wiltern on Saturday, November 26th, 2022. The "House of Mirrors" rockers are ready to meet their fans and electrify the stage as they perform their hits and crowd favorites live this November. As their last show in LA for this year, you definitely can't miss out on this chance to catch them live on stage performing your favorite hits such as "Daylight/Moonlight", "Forever", and "Not in the Cards". So, make sure you hit that button and book your tickets now! 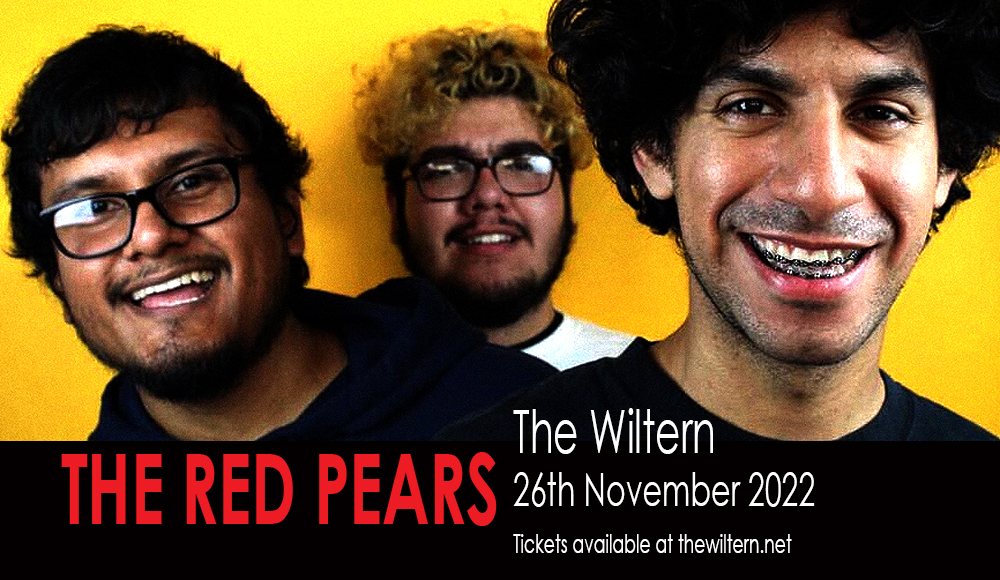 Consisting of Henry Vargas, Jose Corona, and Patrick Juarez, the indie trio hails from El Monte, California, growing a dedicated fanbase for their music that screams authenticity driven by their signature blend of rock. The Red Pears, named after the color of an anjou roja, translating to "Las Peras Rojas" in Spanish, released their newest album "You Thought We Left Because The Door Was Open But We Were Waiting Outside" in 2021.

Reflecting on their journey and sharing how they reached "new heights and new territory that has been inconceivable for any Latino coming out of the San Gabriel Valley", The Red Pears has made a mark in the indie rock scene for their authenticity and passion for the genre.

"You Thought We Left Because The Door Was Open But We Were Waiting Outside" features their crowd-favorite singles "House of Mirrors" and "Not in the Cards".

Inspired by Artic Monkeys and The Strokes to start making music, The Red Pears cite the two bands' simple style which sparked their interest to take their shot at recording their own work. From a church's open mic night as their first gig, The Read Pears have embarked on a journey of surprises, growing a loyal fanbase for their raw and distinct garage rock sound.

Rocking it out since 2014, the band has become known for a reputation of intense and intimate rock performances. Having grown to be one of the region's much-anticipated acts, their flavor of garage rock exudes 90's alternative and inspiration from The Strokes, Artic Monkeys, and The Black Keys while still forming a unique and distinct identity.

Though their third album "You Thought We Left Because the Door Was Open but We Were Waiting Outside" was their first album to be recorded and produced in full-blown proper studio set up, they maintained their distinct garage rock sound and energy in the mix.

With unmatchable passion and authenticity, The Red Pears are set to become the next big thing as they continue rocking it out their own way. With no way to go but forward, the band invites their fans to share this special night at The Wiltern on November 26th, live on stage. Book your tickets now!