'Mandatory fun is back as Weird Al Yankovic marks "The Unfortunate Return of the Ridiculously Self-Indulgent, Ill-Advised Vanity Tour”, stopping by at The Wiltern on Sunday, June 19th, 2022. Get ready to laugh out loud and sing along to Weird Al's signature parodies that'll get you off your feet. Since the '80s, he's dropped hit parodies that sent giggles across the world. Michael Jackson's "Beat It", was switched up into "Eat It", and Nirvana's "Smells Like Teen Spirit" was thrown back as "Smells Like Nirvana". Not only has he spread laughs to music fans, but also the artists themselves with Nirvana saying they "made it" when Weird Al spruced up a parody of their hit track. Join Weird Al as he takes you on a journey of laughter throughout decades of hits and polka medleys live on stage at the very fortunate return of "The Unfortunate Return of the Ridiculously Self-Indulgent, Ill-Advised Vanity Tour". Book your tickets now! 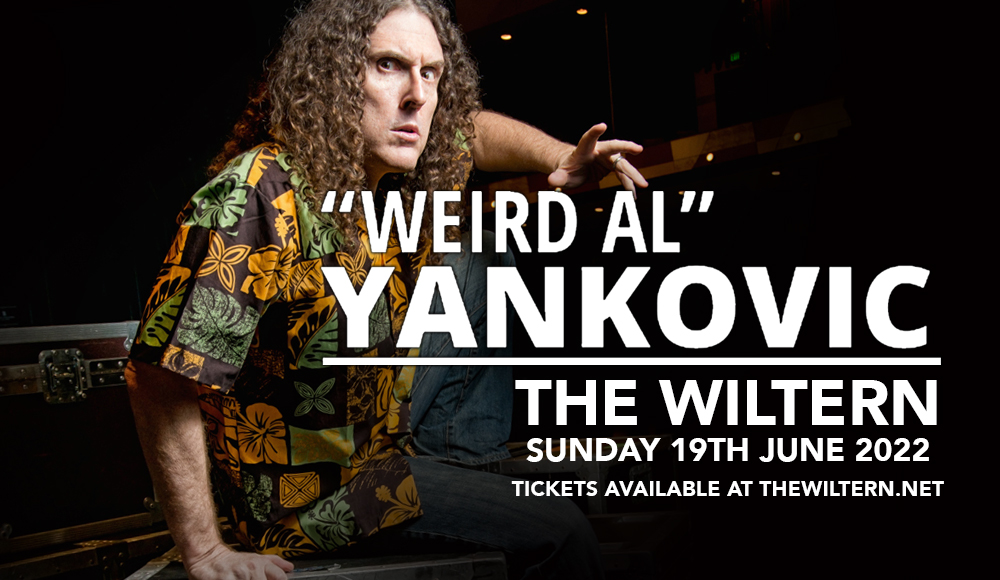 Propelling to fame in the 80s, Weird Al Yankovic has become renowned for his parodies of hit tracks and polka medleys throughout decades in the scene. He's gained praise and recognition from artists themselves for giving their work a Weird Al mix.

It all started when Weird Al got his first exposure through Dr. Demento, a comedy radio personality to which Weird Al says "If there hadn't been a Dr. Demento, I'd probably have a real job now." His mom banned him from listening to the program, but the cheeky man found ways to continue listening to the magic that brought him to take a shot at a career in comedy.

More of his notable work includes "Jurassic Park", "Bedrock Anthem", and his RIAA Platinum-certified hit parody "White & Nerdy" to which original artist Chamillionaire said "That parody was the reason I won the Grammy, because it made the record so big it was undeniable. It was so big overseas that people were telling me they had heard my version of Weird Al's song." – the original track being his single "Ridin".

Madonna even mentioned to a friend out loud wondering when Weird Al would turn "Like a Virgin" into "Like a Surgeon", to which Weird Al indeed made it happen.

“I’ve loved doing every single incarnation of my live show,” said Weird Al. "I’ve been dying to get back out there and torture everybody with it once again!” It's indeed a fortunate return for Weird Al Yankovic's "The Unfortunate Return of the Ridiculously Self-Indulgent, Ill-Advised Vanity Tour”. Don't miss out on a night of laughs, jokes, and the past decades' best tunes live on stage led by the one and only Weird Al Yankovic at The Wiltern. Book your tickets now!